I tested buying Bitcoin at the most popular Australian crypto exchanges

I tested buying Bitcoin at the most popular Australian crypto exchanges

Where should I buy Bitcoin?

If you are reading this, you're probably an Aussie asking this exact question. You want to buy Bitcoin, but you're not sure which crypto exchange to choose. There's a lot of information on the internet, talking about spreads, fees, slippage, volatility, but you want a straightforward comparison that is easy to understand. 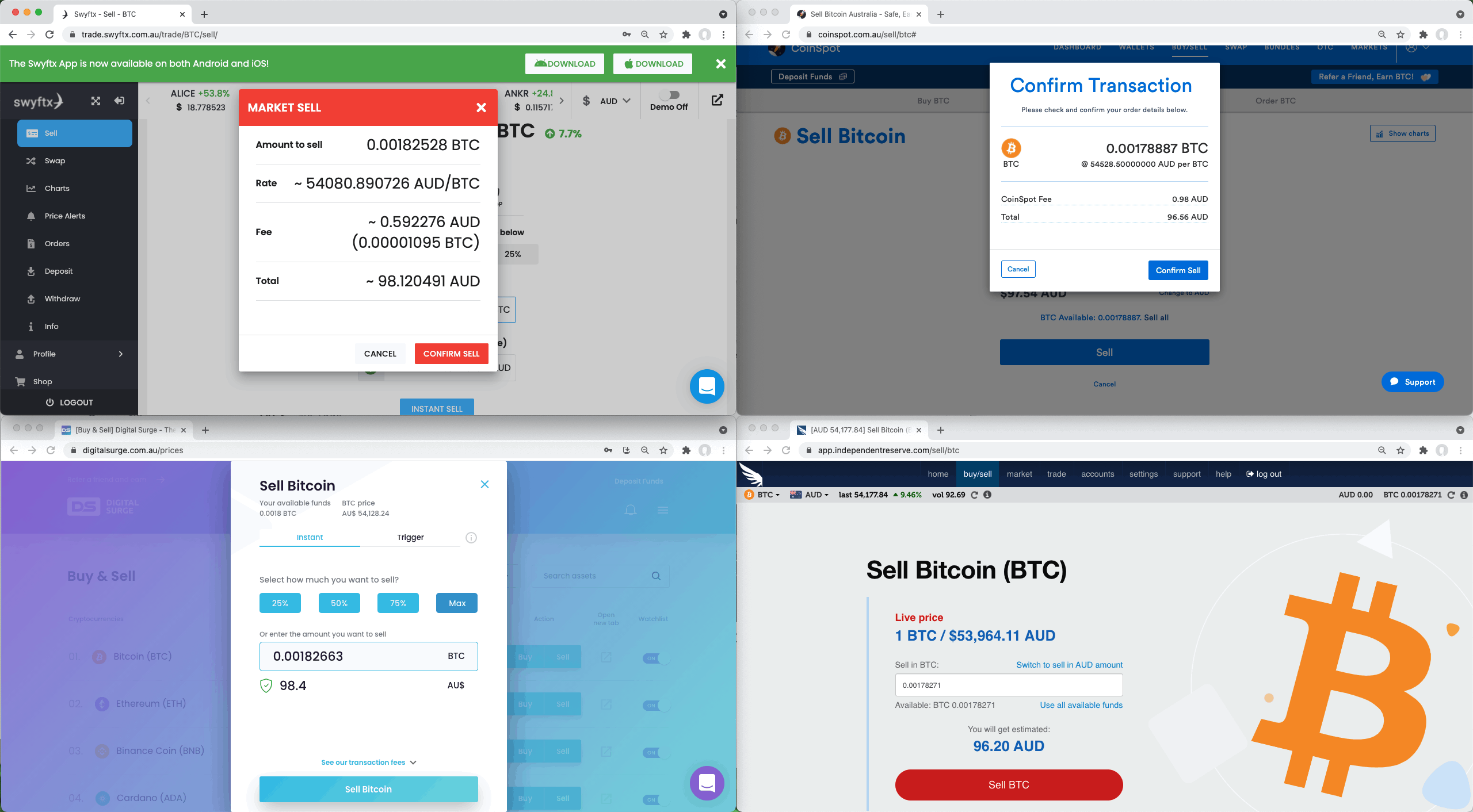 That's what I was looking for as well, and I couldn't find one, so I decided to devise a test on four of the best crypto exchanges in Australia. I compared these four exchanges - Digital Surge, Swyftx, CoinSpot, and Independent Reserve - using a very simple test.

Test: Buy $100 AUD of Bitcoin on each exchange

I thought the best way to test the fees, market rates and ease of use, was to simply deposit $100 AUD into each exchange, and buy Bitcoin. After buying the Bitcoin, I could compare how much Bitcoin I had in each exchange, from the $100 I deposited. In other words, I can see which exchange gave me bang for my buck.

After that, I decided I would sell the entire amount of Bitcoin back to the exchange, and see how much fiat currency in AUD I would have remaining. This would show me in Australian dollars, how much I lost in fees and spreads on each exchange.

Finally, I would withdraw it all to my bank accounts, to see if there were any hidden withdrawal fees, and test transaction times.

I deposited $100 AUD at each of the 4 most popular Australian exchanges - Digital Surge, Swyftx, CoinSpot and Independent Reserve. I bought Bitcoin with the $100 on each exchange, then sold it all, and withdrew the remaining money to my bank. This is how much AUD I was left with from each exchange:

Digital Surge is the clear winner here, saving 2% over CoinSpot and Independent Reserve. Also according to this other test we conducted, Digital Surge has the lowest combined fees and spread.

How I conducted the test

I deposited $100 AUD into Digital Surge, Swyftx, CoinSpot and Independent Reserve. I then opened all four at the same time on the one screen so I could buy Bitcoin on all of them within a couple of seconds of each other. This is important, because Bitcoin (or any cryptocurrency) fluctuates, and if the purchases weren't at the same time, the fees wouldn't be measured properly as the price of BTC would be different. After my purchase, I then proceeded to sell the total amount of Bitcoin received to see how much Australian dollars I would receive. Again, this was conducted within a couple of seconds to ensure the test was as accurate as possible.

After taking note of how much AUD was left in each account from the sale of the Bitcoin, I transferred the remaining amount back to my Australian bank account to see how long it took to receive, and if there were any hidden withdrawal fees that I wasn't already aware of.

Deposits - Ease of use and Fees

I deposited $100 using PayID into each of the four exchanges. The deposit process was easy, and very similar for all of them - it was almost instantaneous (at most, it took a few minutes to receive in my account).

Independent Reserve was the only exchange that charged me $2.50 fee, because I deposited under $1000. All the other exchanges had zero deposit fees, regardless of deposit amount.

I used the $100 to buy Bitcoin instantly. It was quite easy to find how to buy Bitcoin on each of the exchanges. You can see that the price of Bitcoin on each exchange varies, but remember you cannot just compare the price, you need to take into account the percentage fees that they charge. This is why this test is so useful in comparing the exchanges. You can see in the screenshot that the price of BTC on Swyftx was the lowest, at $54,470.78, and the highest was CoinSpot at $55,347.61. 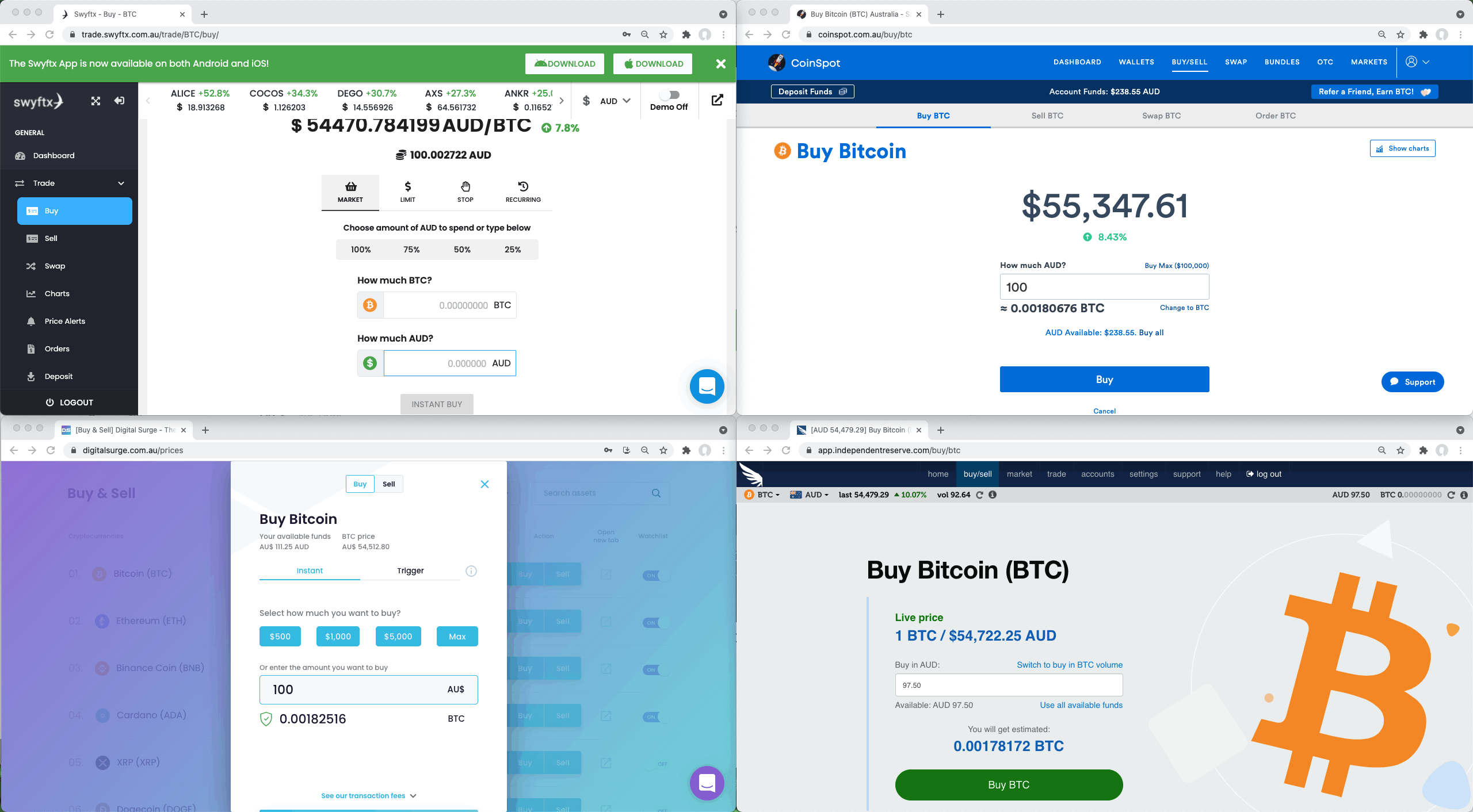 Below is a screenshot of the four exchanges, after I clicked the Buy button to purchase Bitcoin. Swyftx has a small popup that disappears after a few seconds, confirming that the purchase went through, while the other three exchanges give a large pop-up confirmation page. 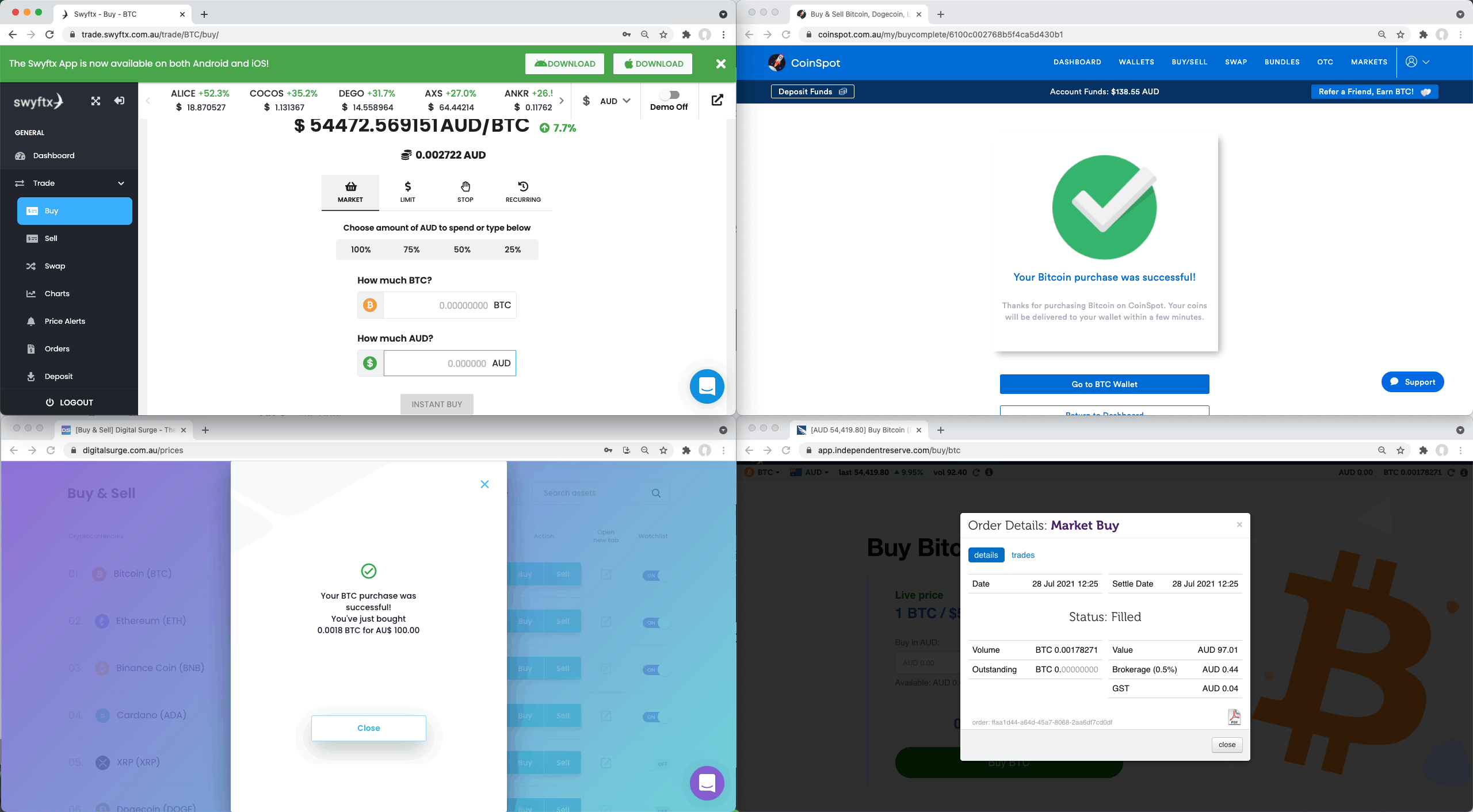 How much Bitcoin did I receive on each exchange?

At this point, I checked each of the four exchanges to see where I owned the most Bitcoin. The results are as follows:

On each of the four exchanges, I sold all the Bitcoin I had bought, to see how much fiat currency (Australian dollars) I would have afterwards. Take a note of the different sale prices of Bitcoin on each exchange. CoinSpot offers the highest price, giving you $54,528.50 per Bitcoin, while Independent Reserve comes last, only giving you $53,959.01 per Bitcoin. This sounds like CoinSpot is giving the best offer, but remember when I was buying Bitcoin (see section above), CoinSpot also charged the highest price. 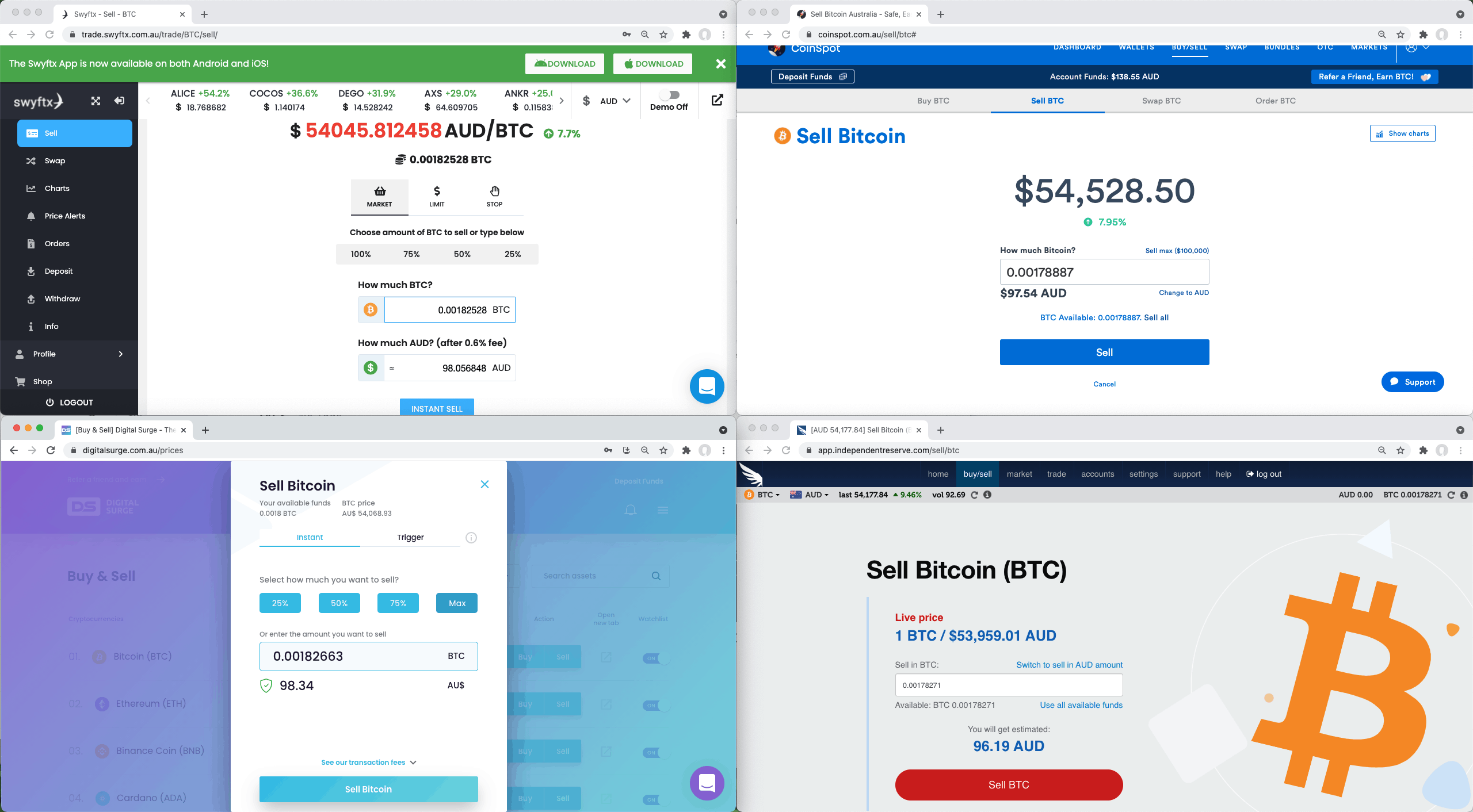 I took a screenshot of the four exchanges, right after selling my Bitcoin. Similar to the buying confirmation, Swyftx has a small popup that disappears after a few seconds, while the other exchanges have a large confirmation which remains until you close it. 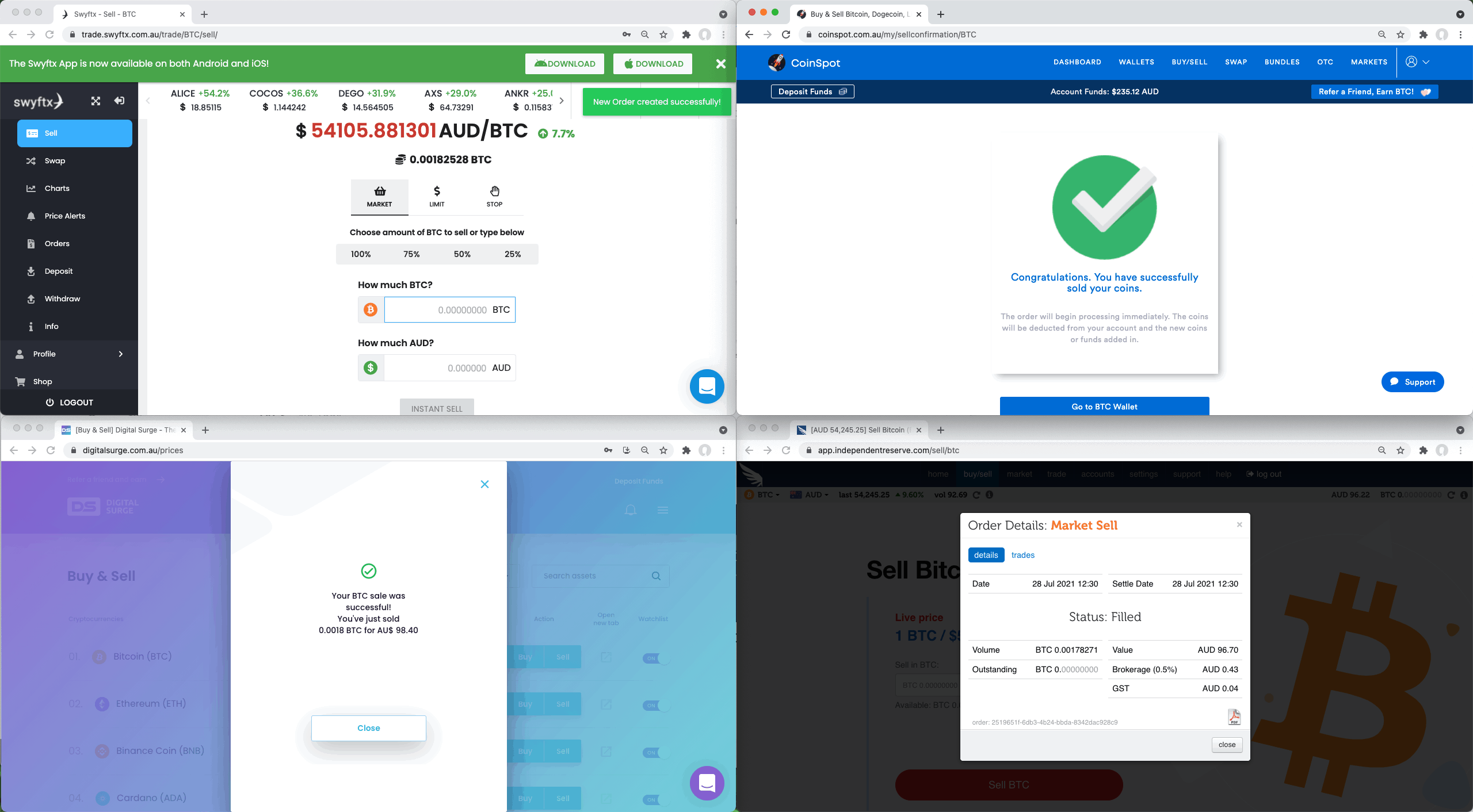 How much AUD did I have on each exchange?

Now I had to check my balance on each of the crypto exchanges, and see how much fiat currency (AUD) I had. Here are the results: 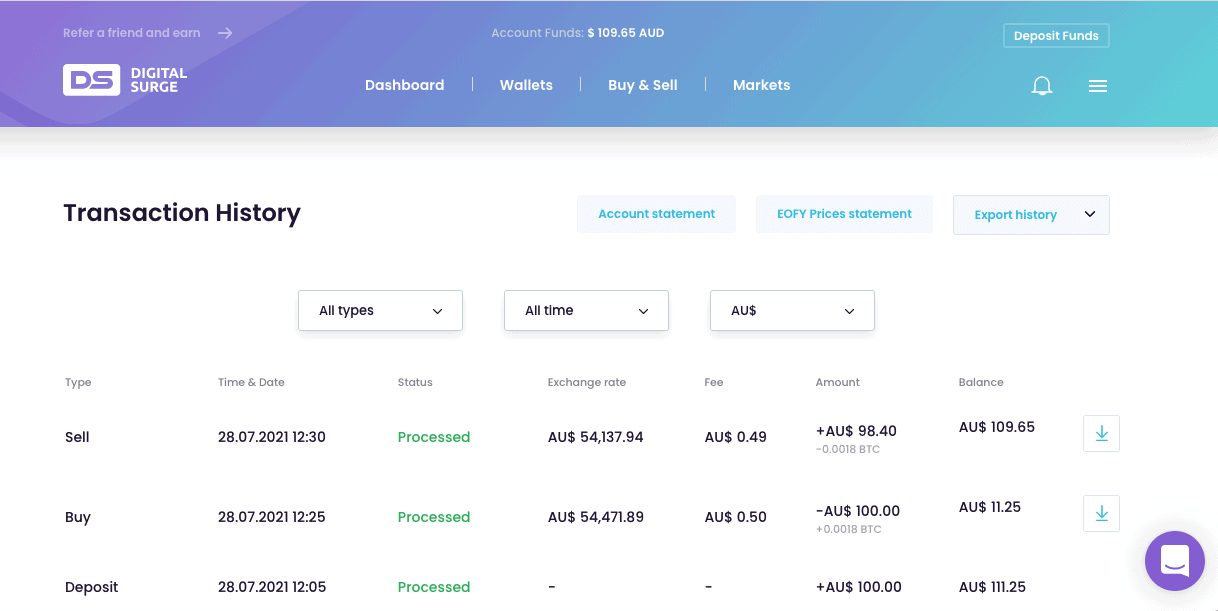 Digital Surge was the winner in this comparison with $98.40, just ahead of its closest competition Swyftx, at $98.17. CoinSpot lagged behind at $96.57, followed by Independent Reserve with $96.22, which was brought down by its deposit fee.

There is not much difference between Digital Surge and Swyftx, so there are other factors to consider such as signup bonuses, or ease of use. CoinSpot and Independent Reserve are behind the other two by about $1.50 - $2.00, and while this does not sound like much, if you are buying larger amounts of Bitcoin (or any cryptocurrency), it all adds up. That $1.50 - $2.00 is equivalent to 1.5% - 2%. If you are buying $1000 that is a $15 - $20 difference, and if you are frequently trading, and in many different coins, you will quickly see the fees add up.

Withdrawing from the exchanges is easy, and the only exchange that has a fee is Independent Reserve, if you choose to use NPP for instant withdrawal ($1.50). I withdrew without paying any fees, to see what the withdrawal times were.

Other factors when comparing crypto exchanges

Besides fees, and how much crypto you get out of your AUD, there are other important factors to take into account. For example, how user-friendly is the platform, how long has the company been established, what Support options are available (Live Chat or only email?), security measures, number of existing users. I will not go into detail here, as this is focussed on the comparison test by fees only. If you would like to read my review of the best crypto exchanges in Australia, click here. You can also read my individual in-depth reviews of Digital Surge, Swyftx, CoinSpot and Independent Reserve.

The clear winner in this comparison test when it comes to fees is Digital Surge. According to a more in-depth test we conducted later, Digital Surge has the lowest combined spreads and fees over a purchase of 10 coins. You can see the results of the test here. Digital Surge has an extremely user-friendly platform, with a mobile app as well as desktop browser. If you run into any issues you can also contact support via live chat or email 24/7. It is free to deposit and withdraw AUD, and the transactions are instant, so you don't need to waste time waiting for your funds to clear. With over 280+ cryptocurrencies supported, Digital Surge is perfect for anyone from a beginner to an advanced crypto investor. 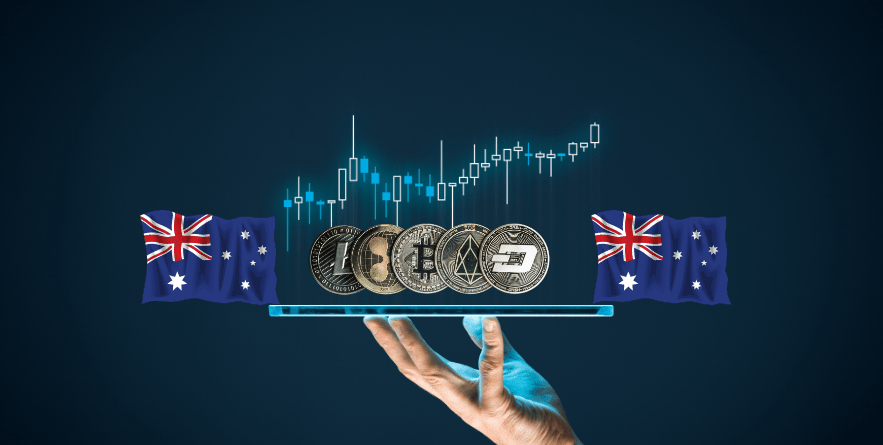 Marketplacefairness.org provides all its content for informational purposes only, and this should not be taken as financial advice to buy, trade or sell cryptocurrency or use any specific exchange. Please do not use this website as investment advice, financial advice or legal advice, and each individual's needs may vary from that of the author. This post includes affiliate links with our partners who may compensate us.

Where to stake Axie Infinity

Where to stake Axie Infinity 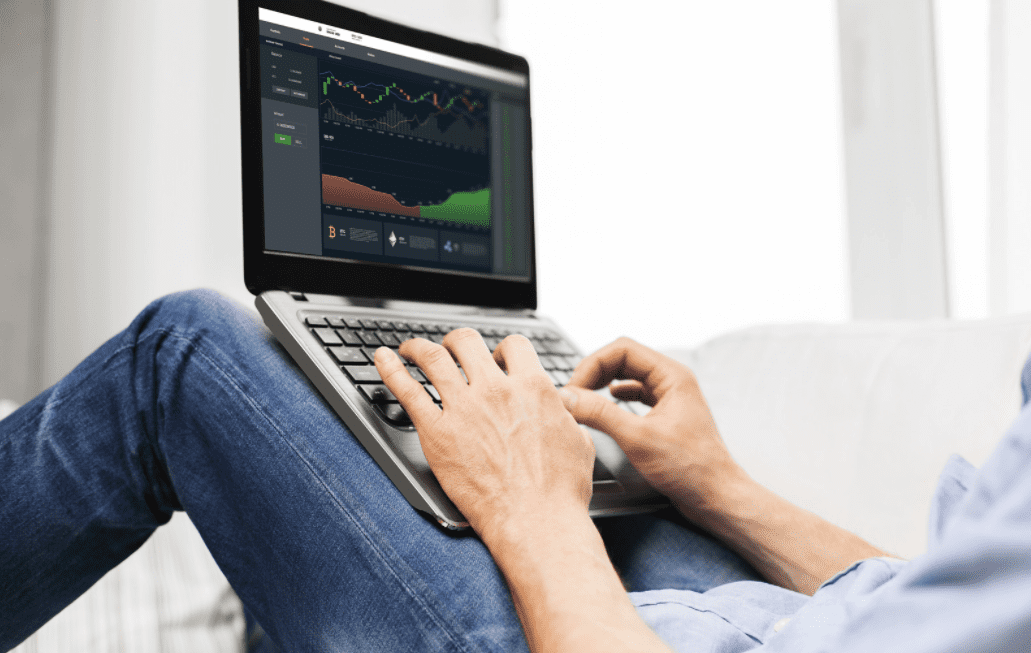 Stay up to date with vital crypto news!

Sign up to hear about the latest updates, market trends, and special offers.